With the Dow Industrial Average and S&P 500 currently near all-time highs, prudent investors should be stepping back to reassess the strength of their portfolios in the event of a major downturn. As we all know, the stock market simply can’t grow in a straight line without dips, plunges and recessions to shake out weak hands and fulfill growth cycles. In this article, I’ll discuss two major factors for investors to keep an eye on, as well as three stocks that emerged from the last recession far stronger than before.

But how do we know if the stock market is overheating? Should we listen to Jim Cramer, who claims that “there’s always a bull market somewhere” despite macro conditions? Or should we follow the bleak, bearish musings of Nouriel Roubini, whose face always pops up on finance sites on days the major indices start to slide?

My advice is simple: follow neither. There are only two major factors you need to consider when evaluating the long-term strength of your portfolio: the P/E ratios of market indices, and the simple theory of “eggs and tennis balls.”

Investors should already be familiar with the P/E (price to earnings) ratio. Generally, when a P/E ratio is low, a stock is considered undervalued, while a higher P/E indicates that investors are willing to pay a premium price in anticipation of higher earnings down the road. If a stock with a high P/E ratio misses earnings expectations, then it tends to slide more than one with a lower P/E ratio, simply due to built-up expectations.

This same metric also applies to major indices, such as the S&P 500. However, for the S&P 500, we can’t simply use a regular trailing 12-month P/E ratio as we would use for individual stocks.

If we did that, the P/E would become artificially low due to higher earnings over the past year, while depressed top and bottom line growth during a recession would cause the 12-month P/E ratio to become higher – thus rendering the metric useless.

To rectify this problem, economists generally rely on a modified P/E ratio called the Shiller P/E ratio, named after its creator, Professor Robert Shiller. Shiller’s P/E ratio calculates the P/E ratio by using earnings of the S&P 500 companies over the past decade, rather than a single year, while adjusting for inflation.
Source: www.multpl.com, author’s modifications

Looking back over historical data, we can see a pattern emerging – the Shiller P/E always rises to an unsustainable point, which Shiller calls “irrational exuberance,” and then collapses catastrophically. Therefore, as of March 12, the Shiller P/E ratio for the S&P 500 rests at 23.40 – which means that the stock market is getting slightly overvalued.

Although there may still be room to grow, we need to make sure our portfolio is loaded up with tennis balls and not eggs – in other words, stocks that bounce back after hitting bottom, that don’t crack and splatter all over the floor.

So how do we distinguish the tennis balls from the eggs?

Personally, I prefer big blue chips that have global brand recognition and deep pockets, which are best equipped to bounce back after a recession.

Let’s take a look at three stocks that I think are well equipped to handle a stock market crash when it hits, which are also three of the most recognized names in America.

Investors sometimes call The Coca-Cola Company (NYSE:KO) the “Bank of Coca-Cola,” and for good reason. Its brand is globally known, it pays a decent dividend of 2.87%, and demand is constant despite a market full of imitators.

The Coca-Cola Company (NYSE:KO) is the best-selling soft drink in the world, and Diet Coke is ranked second. That leaves its primary rival Pepsi in a humbling third place – a situation that’s unlikely to change anytime soon. The Coca-Cola Company (NYSE:KO) is experiencing strong growth in both domestic and overseas markets, with strong demand in China and Latin America driving its international growth. 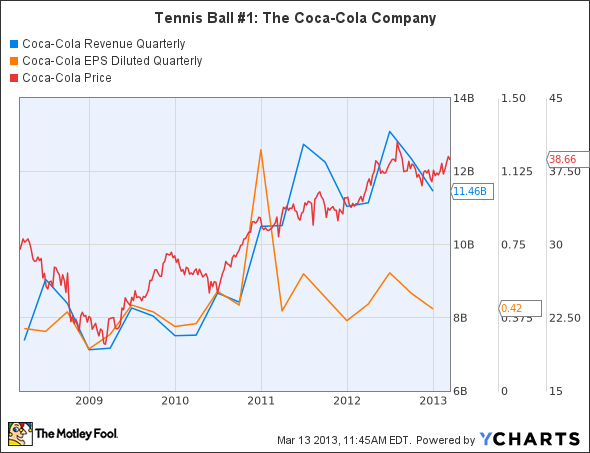 Although things got a bit scary for long-term shareholders during the nadir of the crisis in 2009, investors who didn’t panic and simply waited a year saw all their losses erased, while those who held on longer reaped some nice returns in 2011 and 2012.

The Walt Disney Company (NYSE:DIS) is the largest media and entertainment conglomerate in the world. The “House of the Mouse” generates roughly half of its revenue from its cable networks – primarily ESPN – and another third from its world renowned theme parks. The company also owns Pixar Animation Studios Inc., Marvel and Lucasfilm Ltd., making it an 800-pound gorilla when it comes to making big Hollywood blockbusters.

My reasoning behind investing in Disney is simple – although its revenue and earnings growth are cyclical, as seen in the chart below, its diverse portfolio allows it to weather downturns by allowing stronger sales from more robust segments (TV networks) to offset losses from unpredictable ones (movies). When the macro situation improves, the company can take higher risks, which can generate higher rewards.