Over the past five years software giant Microsoft Corporation (NASDAQ:MSFT) underperformed the market giving its shareholders a meager 7% total return versus 31% for the S&P 500, 239% for computer maker Apple Inc. (NASDAQ:AAPL), and 85% for tech giant Google Inc (NASDAQ:GOOG) (see chart below). Microsoft Corporation (NASDAQ:MSFT)’s flagship product, Windows, faces increasing obsolescence with the rise of mobile computing dominance over the past decade. What does the future hold for Microsoft shareholders? The three risks outlined below hold especially true. 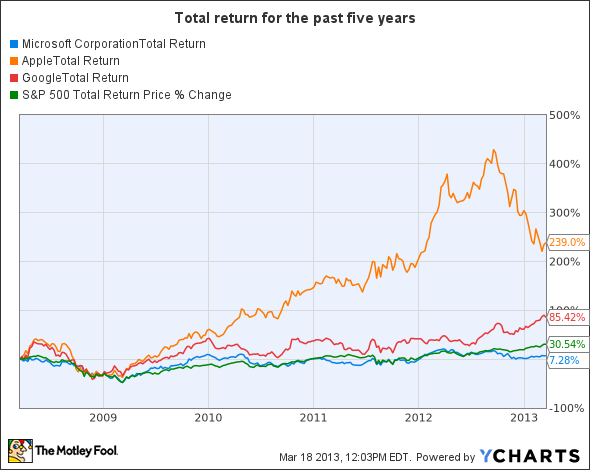 “We face intense competition across all markets for our products and services, which may lead to lower revenue or operating margins.” – Microsoft 2013 Form 10-K Risk Factors

I’d say. Microsoft Corporation (NASDAQ:MSFT)’s Surface tablet doesn’t stand a chance against Apple and Google. According to the Bloomberg article citing data from IDC, Apple and Google commanded a 51% and 46% market share in the tablet market last year. IDC predicts Google’s increasing market share in tablets will soon give it dominance, which explains Apple’s recent steep decline in stock price.

Basically Microsoft Corporation (NASDAQ:MSFT) falls short in a very intense technological race. Microsoft only commanded a 1% market share in 2012. At most, IDC expects Microsoft to command just 7% of the market by 2017; still representing quite a distance from Apple and Google.

If Microsoft continues to lag in the growing tablet market its shareholders will continue to suffer as Windows operated desktops continue to decrease in proportionate size to the overall computing market.

Google’s traditional core competency stems from search ads. Apple’s competency comes from the iPad and iPhone. Microsoft’s core competency has always been, first and foremost, software. Microsoft’s original answer to the online music craze, Zune, disappeared without a trace and was replaced by the XBox. Microsoft CEO Steve Ballmer even said that Microsoft’s future lies more in devices, which represents a significant and quite worrisome change in direction for the company considering the market position of its tablets highlighted above.

Microsoft Corporation (NASDAQ:MSFT)’s strength in productivity software serves as the one bright spot in its future. You don’t see most offices stuffed with computers running Apple productivity software. In fact, Microsoft’s business segment, which includes Microsoft’s Office software, remains the most profitable segment of them all with a 67% operating profit margin.

“Acquisitions, joint ventures and strategic alliances may have an adverse effect on our business.” – Microsoft 2013 Form 10-K Risk Factors

Past Microsoft acquisitions proved detrimental to Microsoft Corporation (NASDAQ:MSFT) shareholders. In 2012, Microsoft took a $6.2 billion write down on its 2007 acquisition of online advertising platform AQuantive.

In 2011, Microsoft spent $8.5 billion to acquire online telecommunications company Skype. I’m not sure how this fits into Microsoft’s portfolio of businesses other than to enhance its strength in productivity. Skype didn’t fit too well with online auction and payments company eBay, which had to take a write down on that company. Microsoft’s acquisition of Skype could turn into a lesson of history repeating itself with a huge write down for them as well.

Microsoft could remake itself as a possible new cloud leader.

In summary, Microsoft lives in the shadows of Apple and Google in this new tablet era. Microsoft could redefine itself in the cloud arena. In the end, your investment dollars can find better fish in the sea.

The article 3 Risks Microsoft Investors Should Worry About originally appeared on Fool.com and is written by William Bias.