The New York Times Company (NYSE:NYT) had an early Christmas present for its shareholders as recent third quarter result showed an improvement in its transition to generate more revenue from newspaper circulation fees in order to cover declining advertising revenues. In the report filed on October 25th, circulation revenues now make up more than 52 percent of total revenue generated – up from 44.1 percent in the first quarter of 2011. In fact, circulation revenues are up 7.4 percent in the quarter on the back of a strong 11 percent increase in digital-only subscribers.

In Kapitall Wire’s last article about the newspaper industry, The New York Times featured prominently as one of the few news publishing companies that have managed to build a modestly successful digital subscription model. Today, digital-only paid subscribers have reached 566,000 for The New York Times and International Herald Tribune, while its sister newspaper Boston Globe have around 26,000 paid subscribers for its web offering. Total daily print subscription remains fairly constant at 717,513 for the six months ending September 30th according to the Audit Bureau of Circulations.

Encouragingly, circulation revenues have also continued to increase because of the continued ability of the Company to conduct price hikes in its major newspapers. In January, The New York Times increased its single copy price by 25 percent and home delivery subscription by four percent. Similarly, the Boston Globe has increased its single copy prices by 25 cents and another six percent for home delivery subscription. The increasingly price insensitivity of its customer base bodes well for the Company going forward.

However, despite the encouraging growth in circulation, there is much room for concern amidst the current downturn in newspaper advertising. In 2011, print advertising was down four percent, and it is expected to slow down further in 2012. Industry-wide, print media has seen its advertising income streams cannibalized rapidly by the rise of both online word and display advertisements. The challenge for the Company is to make sure that the decline in advertising revenues can be made up faster by its circulation revenues.

In a sense, the Company has been making decent strides in meeting this challenge. Comparing first half results of 2011 and 2012, advertising revenue declined US$29.6 million while circulation revenue increased US$38.0 million – resulting in a positive net change of US$8.4 million. If the Company can continue this trend, it is going to be in a healthy position going forward.

Lastly, another disadvantage for the Company is its cost structure. Because its editorial staff is largely based in the highly costly locations such as New York City and Boston, editorial expenses at the Company can be expected to be much higher than other industry players. This puts the New York Times at a disadvantage to its competitors as its margins remain below its peers.

Given that it is currently trading at a higher valuation range than its competitors (5-5.5x 2013E EBITDA to peer group of 4-5x 2013E EBITDA), an investment case can only be made either if cost-cutting measures at the Company are successfully implemented or if revenue growth outpaces its rising cost. 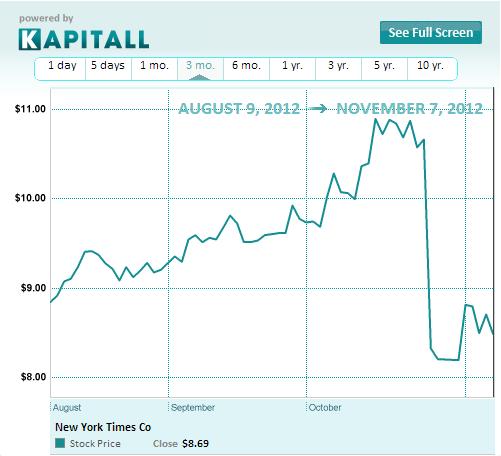 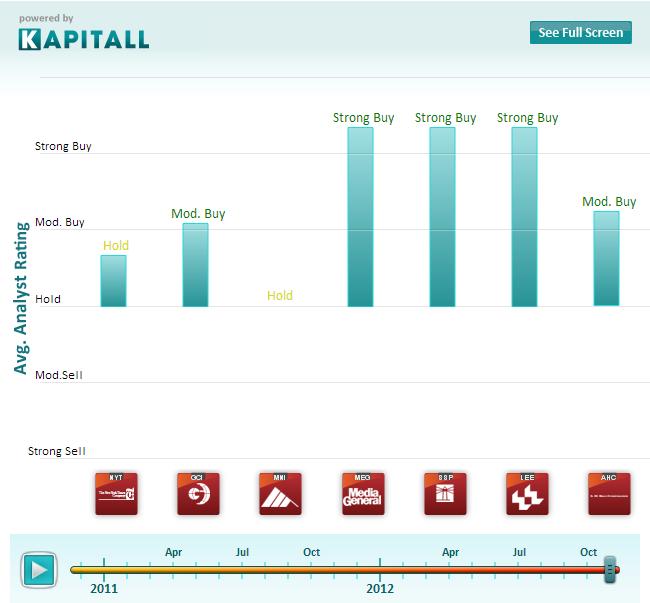