Published on July 17, 2018 at 8:00 am by Insider Monkey Staff in Bitcoin, Ethereum and Other Cryptocurrencies, News, Tech

If one thing is clear about the cryptocurrency boom over the past year, it’s that blockchain technology is here to stay. Now even Goldman Sachs—the once-cynical financial powerhouse that called bitcoin a “vehicle to perpetuate fraud”—calls blockchain “the new technology of trust.” With industry sentiment changing about the new technology, what caused the change of heart? As is the case with skepticism about most things, opinions change when real-world solutions start coming to market; blockchain-based solutions are no different.

Many in the financial world are already aware of blockchain integration with expected industries like supply chain management and financial remissions; however, the same technology is being put to work in other areas as well. Blockchain technology is making its way into the creative industry to solve many of the common issues associated with a scaled-up, global creative industry.

While companies like Long Island Blockchain Corp (LBCC) earned well-deserved criticism for taking advantage of the crypto-mania that perpetuated much of late 2017, other blockchain-related platform introductions brought forth legitimate solutions to the market. Kodak (KODK), the household name and American tech brand that focuses on cameras, introduced KodakOne, a blockchain platform for handling creative usage rights. 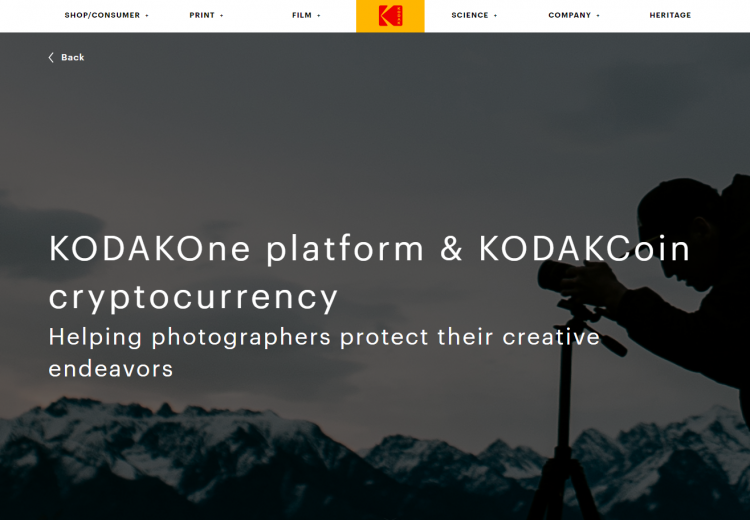 Unlike other companies looking to take advantage of the crypto boom, Kodak’s creation of KodakOne is a less-common example of an established company’s pivot to blockchain integration that actually makes sense. KodakOne, owned by Wenn Digital, is holding a Simple Agreement for Future Tokens (SAFT), rather than a traditional ICO, after sorting out the regulatory requirements with the Securities and Exchange Commission (SEC). The new platform from Kodak will use blockchain technology as a sort of digital supply chain management tool that will be used as a marketplace for purchasing and selling usage rights for creatives.

Utilizing blockchain technology, freelance and independent creatives will have an easier time granting and selling usage rights for content online and keeping track of illegal reproduction and usage of their content.

Another real-world blockchain solution coming to the creative industry deals with rendering capabilities and scaling of operations. As animation and computer generated imagery (CGI) continue to grow in prominence, the need for more computational and rendering power grows with it. Because of the hardware-intensive nature of rendering and animation, large rendering operations are not difficult for big name companies. However, for smaller boutique firms, rendering and processing power prove to be a pain point for scaling up business.

There is a proposed blockchain solution in the works for rendering capabilities as well. Leonardo Render, a blockchain-based startup, is bringing a decentralized powerhouse to the creative industry to level the playing field for smaller firms.

Calling itself the “fastest, simplest, and most affordable cloud supercomputer solution for the graphical rendering industry,” the blockchain solution Leonardo Render is working on includes the ability for users to access vast amounts of rendering power via a decentralized platform. Rather than investing significant capital upfront on equipment, firms are able to essentially “rent” rendering power on the network to complete projects while protecting their intellectual property.

A popular phrase often heard in the cryptocurrency community is “cutting out the middleman” when it comes to transactions, and that’s exactly what blockchain technology is accomplishing with content creators now. Websites that bring in a lot of traffic based on user-created content, like YouTube, earn a notable amount in ad revenue from the creators. However, many in the creative industry aren’t satisfied with the way creators are compensated.

In response, the creative industry has been undergoing a shift to more direct forms of creator compensation. With the rise of platforms like Patreon, audiences are more likely to want to support content creators directly, rather than forcing them to rely on a third party like YouTube.

As with other parts of the creative industry, even the direct creator compensation area is being improved via blockchain technology. While sites like Patreon act as a viable alternative for creators, they don’t solve the issue of cutting out the “middleman.” As the industry continues to grow though, we’re likely to see more blockchain-based solutions like Steemit rise in popularity. Steemit offers users the ability to vote on the content and decide which creators they want to see rewarded. Additionally, the platform rewards users who “curate” (i.e. help to vote on content, comment, etc.) since they’re helping to improve the platform and increase user engagement more broadly—something Facebook, Twitter, Twitch, and YouTube don’t do.

What’s Next for Blockchain in the Creative Industry?

Clearly, blockchain solutions are breaking into the creative industry to offer solutions for problems that haven’t been properly rectified, but there’s another clear trend rising with it: decentralization. Because of the nature of cryptocurrencies and blockchain technology, it’s not surprising to see a focus on decentralized solutions that put more power into the hands of those working in the industry.

This new focus is directed at putting more power back into the hands of creators. Whether new innovations are giving creatives more control over their intellectual property or enabling them to scale more efficiently and pay only for what they use, the future of the creative economy is looking more decentralized.