Hedge fund interest in Haymaker Acquisition Corp. (NASDAQ:HYAC) shares was flat at the end of last quarter. This is usually a negative indicator. At the end of this article we will also compare HYAC to other stocks including Community Health Systems (NYSE:CYH), Donegal Group Inc (NASDAQ:DGICA), and Ares Commercial Real Estate Corp (NYSE:ACRE) to get a better sense of its popularity.

What have hedge funds been doing with Haymaker Acquisition Corp. (NASDAQ:HYAC)? 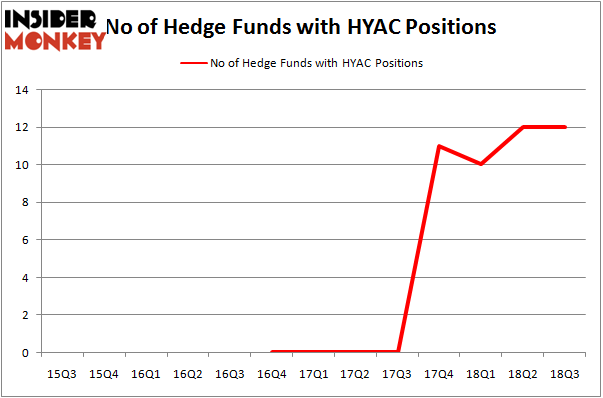 Judging by the fact that Haymaker Acquisition Corp. (NASDAQ:HYAC) has experienced declining sentiment from the aggregate hedge fund industry, we can see that there was a specific group of fund managers who sold off their positions entirely last quarter. Intriguingly, Jamie Mendola’s Pacific Grove Capital sold off the biggest investment of all the hedgies monitored by Insider Monkey, comprising close to $0.5 million in stock, and James Dondero’s Highland Capital Management was right behind this move, as the fund said goodbye to about $0.2 million worth. These transactions are important to note, as total hedge fund interest stayed the same (this is a bearish signal in our experience).

As you can see these stocks had an average of 8.75 hedge funds with bullish positions and the average amount invested in these stocks was $22 million. That figure was $64 million in HYAC’s case. Community Health Systems (NYSE:CYH) is the most popular stock in this table. On the other hand Century Bancorp, Inc. (NASDAQ:CNBKA) is the least popular one with only 3 bullish hedge fund positions. Haymaker Acquisition Corp. (NASDAQ:HYAC) is not the most popular stock in this group but hedge fund interest is still above average. This is a slightly positive signal but we’d rather spend our time researching stocks that hedge funds are piling on. In this regard CYH might be a better candidate to consider a long position.